So it’s been almost three weeks since the last time I posted one of these. For awhile, I considered either posting these once a month instead of once a week or just quietly letting this series die out. Ultimately, I decided against either option, concluding that doing these weekly reflections really helps me re-center myself after a long and exhausting week of near-adult responsibilities. Also, I need an excuse to visit coffee shops and cafes at least once a week. Another reason why it’s been a minute since I posted one of these was the unmitigated (and unexpected) chaos that occurred in the weeks after I came back from my short vacation in Sacramento. But I am back, ready to get back into the grind of posting these every week. Without further ado, here is how this week panned out for me.

How has God been working on your life this week?

This past week has definitely seen a fair share of ups-and-downs-and-all-arounds, and there were moments where the feeling of defeat definitely settled itself comfortably. I had doubts about my new job, which led to confusion, and ultimately frustration, to which I was quick to seek the advice of my friends and family. But one thing that God has taught me this week is to focus on the constant things when everything else is hectic. For me, it became extremely clear that my constant is God’s unwavering love for me and sovereign hand over my life. When I feel as though my life is in disarray and I find myself barely able to keep up, I just tell myself, “Hey kid, God’s got this.” Knowing that I’m not alone in these circumstances and seeking the comfort of God’s embrace help me become centered and motivated to keep moving forward.

What is something great that happened this week?

It’s strange knowing these will be in the hands of hundreds of students in a few weeks.

Two work projects that I’ve worked so hard on finally came into fruition this week. One project (pictured above), something that I worked on for about a month, was to create a leaflet to pass out to incoming freshmen at the start of the upcoming school year. I found this one project to be particularly rewarding because this was one of the first major graphic design projects where I took vast leaps within my own creativity to create something new. I borrowed a friend’s stylus tablet to add hand-drawn objects to the pamphlet, something I am largely not accustomed to, in addition to the fact that I’m still trying to teach myself how to use Adobe Illustrator, using it for the first time only a few short months ago. This week, they were finally printed, and getting to hold a tangible product that stemmed from my own hard work and creativity was one of the best feelings in the world. I have a few more projects that are currently getting finalized that will be printed up within the next week or so, and I’m giddy to see the finished product.

Another work project that was executed this past week was also something that involved treading into unknown territory, and was something that ranked in the positive infinities in terms of being a big deal. A couple of weeks ago, my boss at my new job gave me the task of drafting and designing a press release surrounding the hiring of our new Director of Business Development. Did I mention that I’ve never written a press release before, never taken a single communications or marketing class, and also that this was only my second week on the job? Color me anxious. I knew that this would be one of the times where I would really have to prove myself and my capabilities of being a versatile writer. I researched templates of press releases, relentlessly bugged one of my coworkers for feedback and advice, and eventually had to do the daunting task of putting on my big boy pants, sitting in front of a blank Word Document, and putting every big boy word I knew into that press release.

Long story short, I successfully wrote, designed, and published my very first press release, and it went live earlier this week, getting sent to thousands of people within our network and industry. This was hands-down one of the most important things I’ve ever had to do for work, and with the advice and encouragement of my boss, I finally know my worth and what I’m capable of doing.

What is something that happened this week that wasn’t so great?

My sister and I took a short trip back up to Sacramento for Labor Day this past weekend, and throughout the entire trip – the drive there, the drive to Santa Rosa on Sunday, and the drive back here on Monday – my sister was fighting off a cold. Being that I was in a car for majority of the weekend with my sister coughing and sneezing in the backseat, I knew it was inevitable that I would catch something. But when the end of the long weekend came, I found myself without so much as a runny nose – at that point, I thought I truly had the immune system of Clark Kent. Then Tuesday morning came, and lo and behold, sickness fell over me like a torrential downpour. I thought I could fight through it for at least half of the day at work, but my boss understandingly let me go home to rest after being in the office for just over an hour. Whenever I get sick, I make it a point to take whatever medicine necessary whenever necessary. The entire day on Tuesday, I downed doses of Dayquil and Nyquil, and by Wednesday morning, I was already on the mend. I still have a scratchy throat, but I’m grateful that I’m no longer practically bed-ridden like I was on Tuesday. 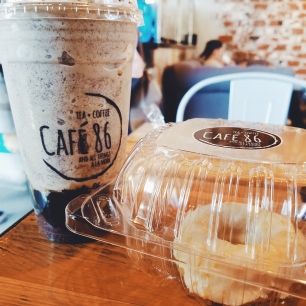 This isn’t my usual order, but my sweet tooth was kicking in strong this afternoon.

A friend of mine (the same one who lent me the stylus tablet I mentioned earlier) introduced me to Café 86 in Chino (where I just so happen to be sitting right now). Their selections are Filipino-inspired, enough to give me a small taste of home whenever I get homesick. My usual: Longanisa (sweet sausage) Grilled Cheese Sandwich and a Hibiscus Iced Tea with Calamansi Juice (basically Filipino lemonade).