I usually compile a bigger list of some of the cool things that happened to me throughout the year on New Year’s Eve, but I figure choosing five of the best highlights of the year and going into a bit more detail of each one would be a better idea. Even though there’s still 19 days left of 2016, I decided to write this post now because of a few reasons: 1. I really just needed something to write about for today’s Blogmas post that would be easy yet somewhat thoughtful and 2. I don’t think anything too extravagant could possibly happen in the remaining two and a half weeks of the year. Please know that I am extremely thankful for everything that happened to me this year, and that I learned a lot about who I am as a person through some of the bigger events, but in the spirit of keeping things a bit more lighthearted, I decided to highlight other opportunities I took over the course of the year, and save the sappy post for later.

I wrote a post about this experience a little earlier in the year, but this still remains to be one of the highlights of 2016, and the fact that it happened in February truly set the tone for the rest of the year. This trip was specifically geared towards college juniors and graduating seniors to give them an idea of what it would be like to intern at Cru HQ in Orlando for a year, using our passions and our field of study to further the Great Commission and use our talents to honor the Lord. This was an immense learning experience for me, and set me on a launchpad that would change the trajectory of my faith walk forever. While it was fun getting to leave California for a few days, make some new friends, and see the operating house of the community I found a home in (and also getting to have dinner at the current Cru President’s home), how I grew in my faith was infinitely a more valuable aspect of the trip, and I will always hold this experience in a special place.

2. Attending a live taping of this past season’s auditions for America’s Got Talent

This experience wasn’t exactly life changing, nor did it set my life on a different trajectory, but it was a cool experience nonetheless. I’m always one to jump at the chance of seeing a taping of a TV show whenever possible, and when this opportunity came along, I didn’t waste any time taking it, and so a couple of close friends and I spent the day in Pasadena and got to watch the taping of the auditions. A few notable moments of this experience include: 1. Standing mere inches away from Nick Cannon as he interviewed contestants planted in our line, 2. Getting to stand next to and have a conversation with one of the auditioners (who KILLED his audition, by the way), and 3. Getting to see how these kinds of things work in the world of show business (Spoiler Alert: A fraction of the audience reactions you see on television are pre-recorded).

After about six months of tirelessly (and stressfully) searching for jobs to help pay for my (hopefully) last year of college, I landed a second part time job as a Marketing Assistant for a company in Orange County. Although it does get tiring commuting back and forth every other day and sitting in traffic for a good part of my morning and evening, the experience I’m gaining from working for this company is absolutely indispensable. At this job, I’ve gotten to write my first press release, gained some insight about the LED light industry, as well as discover what I’m capable of when combining the world of professionalism with the my creativity. Though I was very skeptical about this job at the beginning, I’ve definitely found my niche at this job as I straddle the line dividing the realms of being a student and the real world.

4. Going to the Santa Ana show of Yellowcard’s final tour

Yellowcard has been one of my favorite bands for awhile, and getting to see them live was an amazing experience, especially since I had never seen them perform live before. This particular tour that they’re embarking on was probably the perfect first (and last) one to attend. Usually, when bands tour, majority of their set list consists of songs from their most recent album, with a few older ones sprinkled in. Since this was Yellowcard’s last tour, they performed songs from all of their albums, including songs they had never performed live before. Although they had been one of my favorite bands for a handful of years, my sister basically grew up listening to Yellowcard, and so it was really cool getting to see her enjoy live performances of the music that got her through some of her most formative years. Even though I’ll be attending their show again next year (their very very LAST show EVER), it was still an amazing experience getting to see them live for the first time.

5. Getting the chance to go to the Magic Castle 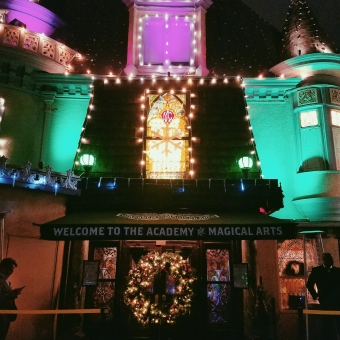 I’ve heard small tidbits of information about the Magic Castle before, and I always thought it would be pretty cool to go one day, though I wasn’t exactly dying to pay it a visit. I knew that it’s a super exclusive venue, where paying members and featured magicians, as well as friends and friends of friends of members are the only ones who are able to see the inside of the Castle. I suppose it was that aspect of it, along with the undeniable allure of magic shows, that made it an attractive prospect in the first place. My company’s year end celebration was held at the Magic Castle this past weekend, and I am so glad I decided to go. I got to watch close-up magic shows (one magician used me to make a coin disappear right in front of my eyes), a bigger production with two magicians (one of which provided the hand, “Thing,” in The Addams Family), and went to a parlour show, each one equally as captivating as the others. To top off the enchanting evening, while we were waiting for the valet, one of the members gave us his information in case we ever want to pay the Magic Castle a visit again (i.e. Ya boy now has an in at one of the most exclusive venues in Hollywood, AND IT HAS MAGIC SHOWS). But I am so fortunate to have gone with my company, because this was such a great chance for me to sit and really get to know some of them better. Getting to say that I have work friends now will definitely help getting up to go to work at this job much easier.

As 2016 winds down, it’s fun to look back at all of the big (and not so big) happenings of my year. I felt like this post was a good alternative to my usual list of things I make at the end of every year. Now that I’m on break from school and all of the responsibilities that come with it, I’m ready to finally unwind and enjoy the last few days of 2016.