On the heels of my last blog post where I gave my top 5 films released in cinema this year, I figured I’d follow that up with some recommendations from the online streaming world. This is now the fourth year that I’m dedicating an entire blog post to Netflix programming, and as long as they keep pushing out quality content, I’m more than happy to offer my personal favorites from the year. Without any further ado, here are some of my personal favorite Netflix releases from this past year for the next time you have some time off to binge some quality content.

John Mulaney has been one of my favorite comedians for the past several years, and last year, I had the immense pleasure of getting to see him perform live in Los Angeles. Even though I saw his show live and in person, I wasn’t the least bit disappointed with the performance that was released on Netflix earlier this year. In this special, John Mulaney talks about the woes of university philanthropy (which I wrote a commentary about that you can read here), reminisces about school assemblies, and gives his infamous comparison of the current president with a horse turned loose in a hospital. If you’re a fan of wholesome stand-up comedy (and would like to get an idea of where I get some of my sense of humor from), John Mulaney is definitely your guy to go to.

To be quite honest, I’m not entirely sure what enticed me to start watching this show in the first place, but I nonetheless found myself binging the entire first season in one afternoon. It normally takes a lot for me to even consider starting a new show to watch and, while I’m being honest here, the premise of the show didn’t really do much for me. With all of that being said, Magic For Humans was quirky, feel-good, and charming from beginning to end. In this show, Justin Willman takes his magic tricks out in public, performing in front of passers-by at parks, grocery store parking lots, elementary schools, and even a yoga class. Each episode also has a central theme that ties into his magic tricks, and he usually ends each episode with an underlying message that resonates with people of all ages. If you’re looking for something light-hearted and captivating, Magic For Humans is a solid choice.

The least light-hearted on my list, The Push explores the world of mind-control and the power of compliance. In this documentary, Derren Brown examines how far the practice of coercion can go when he hosts a launch party for a fictitious charity, and slowly convinces one of his guests to perform a series of acts, each gradually increasing in extremity as the night goes on. These tasks range from simply purposefully mislabeling non-vegetarian hors d’oeuvres at the party to blatantly committing murder. At this staged event, everyone in attendance are actors, with the exception of the guest who is coerced into performing these acts. The Push keeps you at the edge of your seat from start to finish, and takes you on an anxiety-filled ride as you watch the events of the night unfold.

Just like with Crazy Rich Asians in yesterday’s post, I heavily debated including Queer Eye in today’s post, solely because of the amount of exposure this show has already gotten over the past year. For those who don’t know, Queer Eye is a reboot of the early-2000’s Bravo reality show in which five gay guys revamp one individual’s (usually a straight guy) entire lifestyle in the areas of fashion, personal grooming, culture, interior design, and diet. Each episode also tackles controversial subjects such as homophobia and racism, but does so in a gentle and honest way. There’s not much I can say about this show that hasn’t already been said in media, so I’ll just leave it with this: Queer Eye will make you laugh, cry, and restore your faith in humanity all at once with every single episode. You’ll finish each episode not only wanting to be friends with the entire Fab 5, but also rooting for the individual being featured in the episode. You may even pull some helpful tips from the episodes and use them in your own life – not a day goes by where I don’t implement the French Tuck in my outfits. 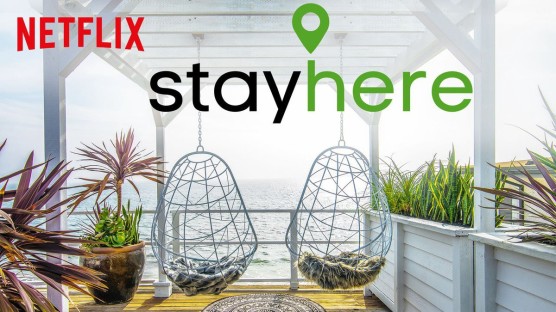 Stay Here brings the charm and quaintness of HGTV and combines those with the wealth and high production value of Netflix. This reality home improvement show features an interior designer and a real estate broker who go around the United States and help people turn their less-than-mediocre short term rental homes into lucrative staycation destinations. Stay Here offers the same satisfaction and charm of any home improvement show, but with just slightly higher quality production.

In case you have a bit more time off to binge more shows and movies, here are links to my previous Netflix recommendation blog posts:
Part 1
Part 2
Part 3